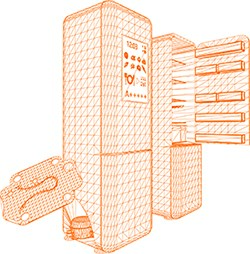 The key to reducing energy consumption and increasing cooling capacity was higher lift of the 'tongue' of the compressor valve, which exposed it to much higher fatigue loads. Only Sandvik Hiflex could meet the mechanical property requirements for bending and impact fatigue strength.

Sandvik Hiflex compressor valve steel has been used in new compressor models since 2011. Exchanging just a part of the Chinese population's refrigerators into energy-smart models designed with the new compressor will make a major difference to the world's future energy consumption. If this was to be done with 125 million of the country's refrigerators, 25TWH could be saved annually. To use a different comparison, that amount of reduced energy consumption is equal to 25% of the power generated by Three Gorges - the world's largest hydroelectric power station.