A giant leap into the future


The corona pandemic drove Sandvik’s tube site in Germany to go fully digital in only two days, a change that normally would have taken five years. A flatter, more efficient organization and improved flexibility make it a production model for the future.

When the coronavirus hit Europe, the precision tube site in Werther, Germany, faced a potential lockdown. With a large order backlog that would have been a disaster for the business, there was also a huge demand for high precision tubes for ventilators at the time.

“We immediately took the decision to order a digital mobile device for each employee to keep the mill open and secure enough distance between our people,” says Thomas Froböse, Production Unit Manager at Sandvik.

Turning a challenge into an opportunity

Ninety people work in production at the Werther site, with three rolling shifts of 30 people. Ninety tablets were set-up and handed out in two days and the whole unit went digital. Programmers and automation engineers are now connected to all the machines via a network, and control and support the functions of the machines ‒ from the safety of home.

“The only people in the mill are operators and shift leaders who work isolated and follow our firm restrictions on distancing,” says Froböse. “All communication is also run differently; whiteboard meetings have been switched to digital working files and we now use digital documentation of shift plans, detailed planning for the machines and order management for every machine. 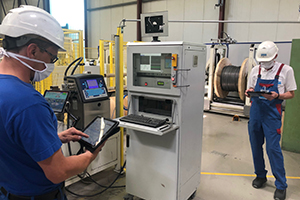 Going digital at the Sandvik plant in Werther, Germany, after the pandemic resulted in a more streamlined process."We have been running our operations this way since 10 March, and even though it's quite a change we have managed to complete the quarter with the best turnover ever,” Froböse continues.

The rapid switch would not have been possible without previous preparations. For over 20 years, the Werther site has been at the forefront of production development, including integrated digital systems. Five years ago, a security app for all employees was implemented and two years ago the site introduced a digital system for documentation. But even though a digitalization of the production was in the plan for the future, the current situation forced a full-scale pilot from start.

“I'm very proud of the employees and how quickly they adjusted to this new situation,” Froböse says. “It's through their meritorious work that we could continue our business and avoid shut down." A survey shows that 80 percent of the workers are positive to the change while 20 percent are a bit more hesitant, although everybody uses the system.

We have been running our operations this way since 10 March, and even though it's quite a change we have managed to complete the quarter with the best turnover ever

Information straight from the source

Several advantages have already been defined. Being able to communicate directly with the operators on their own digital devices is a huge benefit. Regular shift meetings could mean having the same meeting three times a day and still miss out on some people. Now everybody gets the same information straight from the source, improving efficiency and reducing hierarchy.

The setup is new for heavy industry production and surely the path to go in the future.