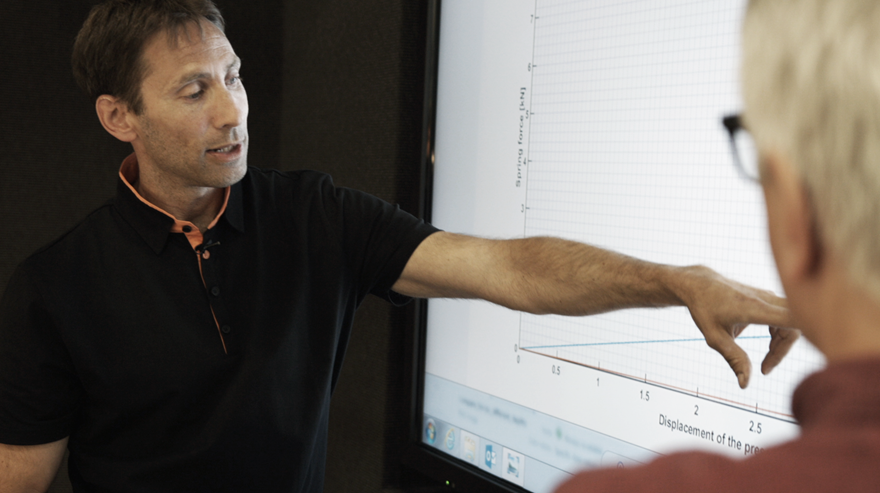 If you have seen Sandvik’s “Challenging Tomas” film series, you have already met Tomas Forsman. Tomas is one of Sandvik’s experienced researchers specializing in precision strip steel. While process and product development along with customer support are all parts of his job – it’s the research area that truly brings a sparkle to his eye. It is more freeing and a bit wilder than the other tasks, and really proves the strength of Sandvik’s expertise.

– We are so many researchers here in Sandviken, working together to find new and pioneering solutions for our customers, OEM’s and end-users. There will always be an expert nearby and it often feels like we can do anything. The sky is the limit, Tomas laughs.

Being the inventor of several applications, Tomas has the opportunity to really dive into complex challenges by exploring, generating wild ideas, discussing with his colleagues and through systematic data review and calculations. When Tomas met 11-year-old Judith and talked about track and field with her, the focus for the challenge in the film was long-jump. But he couldn’t help but take on another challenge as well: javelin.

– Look carefully at the surface of this traditional javelin. Do you see the roughness of the steel? The structure even runs opposite to the direction of travel! My starting point was that we should reduce the air resistance and create a smooth surface, he explains.

Tomas explored the idea of producing a new type of javelin by welding a stainless steel strip into a tube to achieve exceptional tolerances. After noticing how the javelin always vibrates a little when it leaves the hand of the thrower, he also thought of a spiral which is stretched during rotation and then welded inside the tube.

– The spiral would strive to contract, forcing the tube into compression. This would make it both stronger and more stable, he says while showing impressive diagrams on his computer.

When taking on the long jump innovation challenge with Judith, Tomas found inspiration from a simple reflective band that most of us have used at some point; the kind that is completely stiff and straight until you bend it over your arm, then folds neatly around it.

– The strip has two stable positions. Just add a little force and it will snap around your arm in a second. By producing a similar construction under Judith’s shoe, I figured that she would jump further thanks to the extra force. I came up with an idea for a spring where the radius is five times smaller in one direction than the other and guessed that it would provide a force that was five times greater when snapping but my FEM calculations (Finite Element Method) showed that it would actually give ten times the force, Tomas says excitedly.

While the javelin and long jump challenges gave Tomas complete freedom of thought, most customer challenges come with more conditions and requirements. The way of working is nevertheless similar.

– We often work closely with our customers’ R&D departments for continuous improvements. The longer we work together, the better we become at providing pioneering solutions that make their products substantially better. Innovation flourishes at the cutting point between their process know-how and our material expertise, Tomas says.

When the Vasa Museum in Stockholm turned to Sandvik, they brought a real challenge. The existing iron bolts in the almost 400 year old warship were corroding and poisoning the oak with iron, threatening to destroy it completely. A fruitful collaboration with the museum resulted in new stainless steel bolts of the finest quality. Tomas says that half of the bolts have now been exchanged and this has also reduced the weight of the ship.

– When we have exchanged all 5,000 bolts, the ship will be ten tons lighter than it used to be, thanks to the strength of the Sandvik steel, he says.

This research and innovation process has also been used in other applications. Among many other customer collaborations which have led to groundbreaking solutions, we find a super-thin platinum-iridium alloyed wire in a brain implant for Parkinson’s patients and coated fuel cell plates in large series. Watch the film where Tomas tries to explain these innovations to Judith during her visit to Sandvik.

What is your challenge? The solution might very well be found in Tomas’s office!