You are here: Home Technical center Expert columns Archive What makes the shift to a hydrogen economy more likely today than 15 years ago?

What makes the shift to a hydrogen economy more likely today than 15 years ago? 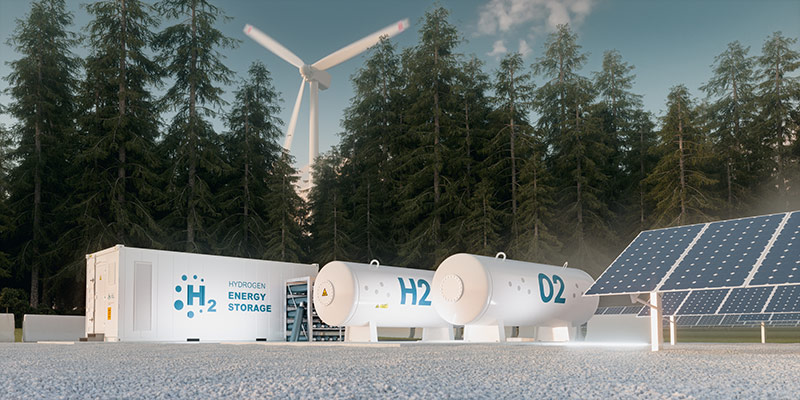 Some months ago, I read in the newspaper that Shell was planning to invest 14 billion USD to build an export terminal for Liquid Natural Gas (LNG) in British Columbia, Canada. The reason that this project caught my eye was due to the comment made by one of the panelists in a discussion forum at the Singapore International Energy Week in 2017. He talked about the synergies of using natural gas today, with a shift to using hydrogen for the same applications in the future.

Power to gas and energy storage

So, what has changed which makes a hydrogen economy more likely than 15 years ago? The straightforward answer here is electricity generation via wind turbines and photovoltaic cells. This trend is proceeding with more speed than was predicted but the intermittence of the 2 renewable energy sources due to the vagaries of the weather dictate that an effective method of storing the electricity is required. Batteries have improved a great deal over the years but are unsuitable for most grid-scale applications over a long period of electricity outage. Pumped hydro represents the gold standard of grid-scale energy storage but is only available in some locations due to its dependence on suitable geography. ​

This is where hydrogen comes in. Like electricity, hydrogen is an energy carrier as opposed to a fuel, since it needs to be manufactured. The fuel, in this case, is the wind or the sun which is used to make electricity that splits water into hydrogen and oxygen via electrolysis. The part that I think is key is the fact that hydrogen doesn't always need to be used in conjunction with fuel cells in order to make electricity again when a demand peak occurs, but can instead be added into the natural gas grid and mixed with methane and be used in the same way as the methane would be used. There are numerous projects being undertaken around the world to investigate the feasibility and limits to doing this, for example in Leeds, UK and in Sydney, Australia to mention just two.

There are technical challenges associated with handling hydrogen with some metals including steel though, and those challenges are related to the phenomenon of hydrogen embrittlement. If you were planning on using the infrastructure for natural gas distribution that already exists in many countries, to pipe hydrogen into people's homes for heating and cooking, maybe there would be concerns? Well here's a very interesting point that I only learned of a couple of years ago. It turns out that the old-school "gasworks", the original source of town gas prior to the discovery of natural gas (methane), were just a series of coke ovens similar to ones that exist with every blast furnace in the world which convert coal into coke to be used for reducing iron. The town gas produced back in the day from coal consisted of a mixture of carbon monoxide, methane, and up to 60% hydrogen!

15 years ago, although visions of an overall hydrogen economy were widely discussed, the only practical application of the "hydrogen economy" was in fuel cell applications. These focused mostly on cars and this application was very much limited by the lack of a refueling infrastructure. ​

Now though, even industry is evolving its view of hydrogen. Today there is already a significant hydrogen industry worth over 100 billion USD per year. The major part of the hydrogen making up this market is used in the downstream processing of petrochemicals and in fertilizer manufacturing and 90% of it is manufactured by the steam reforming of methane from natural gas. There is an increasing interest in using what is today called "green" hydrogen which is the form made by electrolysis of water using electricity made from renewable sources. For example; there is a fertilizer plant in Western Australia developing a pilot plant to make ammonia using green hydrogen, and Shell has a project to make and use green hydrogen in one of their oil refineries in Germany. This is a big deal since there is usually no shortage of hydrogen made internally from hydrocarbons in oil refineries.

Fertilizers and petrochemicals aren't the greatest sources of CO2 emissions in industry though. The title of the largest CO2 emitters goes to steelmakers and cement manufacturers collectively and the main reason is that the chemistry of the processes that result in these products also results in the generation of CO2. As example, in steelmaking CO2 is produced when coke reacts with the oxygen in iron ore to reduce the ore to iron in a blast furnace. The Swedish steelmaker SSAB is one of several steel companies* researching the reduction of iron ore with hydrogen instead of coke.

*Sandvik doesn't reduce iron from its ore but uses metal scrap as its starting point for making stainless steel.

How is the hydrogen market going to evolve?

It very much looks as if the stars are aligning behind hydrogen. Some market assessments conservatively put growth rates in high single figures, but some large and credible companies are openly saying these estimates are much too low. Some have said the truth is more likely to be close to 10-fold growth by 2050.

In October 2018 I saw the keynote presentation by Dr. Fatih Birol, Executive Director of The International Energy Agency at the opening of that year's Singapore International Energy Week. Dr. Birol referred to the growing interest in hydrogen. He said that he had never seen such global interest and consensus in the role of hydrogen as a key tool in decarbonizing energy production and industrial applications as well as in transport applications where batteries will be impractical. This view was echoed during the other keynote at the opening given by John Abbot, Downstream Director of Shell.

In terms of hydrogen fuel cell applications, Sandvik's interest is clear, but fuel cell technology run in reverse is the fastest growing method of producing green hydrogen from water. And as it releases a high concentration of hydrogen ions in doing so, it makes the environment much more acidic, and therefore far more corrosive.

It looks as if the hydrogen market is really one to keep an eye on. ​

By Mark Newman (with the welcome help of my colleague, Sustainable Business Manager at Sandvik and expert on all things "green hydrogen", Mats W. Lundberg.)